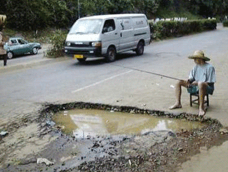 Thomas Edison was a fisherman.

Sure, he was the world’s greatest inventor, too.

But fishing was his thing. His territory. His place. His solace.

And in those days, fishing was serious business. A man could never be disturbed while he was fishing.

Fast-forward to a few centuries later.

If you take the official tour at the Edison Winter Estate in Ft. Meyers Florida, you might get a chance to snap a picture of Tommy’s favorite spot.

According to their records, Edison built his own private 1500 ft. pier for fishing in the deep water, which he visited daily.

But that’s not the cool part.

What IS cool is that Edison NEVER used bait.

He was known to go fishing without any bait so he could be alone with his thoughts. For hours. Every single day.

That’s how processed oriented he was. That’s how detached from outcomes he was.

And of course, 1,093 patents later, I guess it worked out pretty well for him!

SO, THAT’S THE SECRET TO SUCCESS: Go fishing every day.

No. It isn’t about fishing.

This is about practicing a simple; three-word philosophy in your creative life:

Horizon, not point.
Process, not answer.
Ball, not scoreboard.
Discovery, not answers.
Pursuit, not attainment.
Journey, not destination.

Unfortunately, we live in a society where outcome (not process) is a primary value. And this makes it difficult for people to love the work more than what it produces.

To do things “just cuz,” and not FOR someone or something.

AND I BELIEVE: Until we teach ourselves to abolish our intentionality, until we become intrinsically motivated, and until we discover that the purpose can be found in the process … the true potential of our ideas will never be fully realized.

BUT, HERE’S THE GOOD NEWS: If we can learn to adopt a more process-oriented attitude, we’ll never run into this problem.

So, let’s explore nine practices for using baitless hooks in your creative life:

1. Think Modular. Whatever you’re creating, it’s not what you think. It’s not a blog post, a drawing, a scribble, an essay, a chapter, a verse or a poem. It’s a “module.” I coined this term a few years back as an objective way to define content.

I define a module as, “an unclassified chunk of creative material.” And when you start to view your content in this fashion, the possibilities for what that content might become are endless! What modules are you working on?

2. Autotelic, not exotelic. According to creativity guru Mihály Csíkszentmihályi, there are two ways to approach any activity. First, there’s exotelic, which means we do something not because we enjoy it, but to accomplish a later goal, i.e., to catch fish.

Then there’s autotelic, which means there’s no reason for doing something except to feel the experience it provides, i.e., because you love sitting on the dock. The challenge is to stop trying to label everything. This will lower your inhibitions and enable your natural creativity to flow organically. Why are you creating?

3. Carry no agenda. Don’t create “for” anyone or anything. Not the media, the customers, the fans, the galleries – NOBODY! Just do it for the sake of doing it. Eventually, (hopefully), the “for” will appear on its own. It will be a nice added bonus when someone wants your work. (However, even if they don’t, at least you enjoyed making it!) It’s a win-win. Whom are you creating FOR?

4. Detach from numbers. Forget the clock and forget the score. Retire the counter and scale back scales. Of course, this may come as a challenge to many, especially Westerners who were raised in a hyper-competitive culture.

However, when we start to focus on the activity and not the results, our performance gets better. And of course, the results get better. When you detach, your inner emptiness is more able to catch the flow of the universe. What do you need to stop counting?

5. Beware of intentionality. As important as it is to set goals, sometimes it’s better not to have any. No purpose or agenda whatsoever. Especially in the world of creativity, Intentionality blocks creativity and buries solutions.

Ever sat down at the piano and told yourself, “Alright, so create something! Go!” It just doesn’t work that way. Inspiration comes unannounced. And often when you care (and try) the least, you do the best. So, just relax. Discard your agenda and just start creating. What would happen to your productivity if you were less intentional?

6. Create incidentally. Speaking of intentions. When faced with any task, endeavor or project, two questions also need to be asked: “What needs to be done intentionally?” And “What do I hope will happen incidentally?”

First, let’s explore the word “intentional.” It comes from the Latin intendere, which means, “To direct one’s attention.” So, it’s the action you take first, along with the attitude you maintain while taking it. And, in many cases, that which you intend to do is simple, process-oriented and free from agendas. Like creating. Or thinking. (Or fishing.)

Now, on the other hand, the word “incidental,” comes from the Latin incidentem, which means, “To occur casually in connection with something else.” So, it’s the consequence of the intentional stuff. And, in many cases, that which incidentally occurs is organic, serendipitous and reciprocal. Like money. Or fame. Or recognition. (Or catching fish.) Is this an intentional action or an incidental consequence?

7. Studio, not gallery. This is a cool way to think about it, according to Steven Pressfield. He wrote The War of Art, which I believe is the most important book on creativity written in the past 20 years. (And I read a LOT of books!)

Anyway, Pressfield talks about a dichotomy. First, there’s creating for hierarchy, i.e., the impression it makes on others. You know, the gallery. Then he talks about creating for territory, i.e., the act itself and how it affects the artist. You know, the studio. Do you think Edison was fishing so he could snap a picture of the 3-footer he caught and show it to his buddies?

8. Become a suspender. In addition to suspending your agenda, using baitless hooks is also about suspending your preoccupations and preconceptions. For example, “Will anybody like this song?” “Will this book even sell?” “What will my husband think when he sees this painting?”

You challenge is to – at least temporarily – remove the barriers of potential criticism and trust your artistic voice. Just go. Rely on process. What do you need to surrender to?

9. What finish line? Finally, Van Gough once said, “A great work of art is never finished.” That being said, be sure your focus is on the journey, not the destination. This is especially appropriate when it comes to the issue of money. See, as artists, it’s easy to create stuff we KNOW is going to be bought. Or to create stuff for which there is a guaranteed market or readership or customer base.

Look. You know the drill. You’ve heard it a million times.

As a creative professional, I’m challenging you to start thinking a little differently. Put these nine practices to use and start approaching your creative process like the great Thomas Edison did.

LET ME ASK YA THIS…
Is your art focused on product or process?

LET ME SUGGEST THIS…
For the list called, “49 Ways to become an Idea Powerhouse,” send an email to me, and I’ll send you the list for free!

Still haven’t finished that book you started in 2006?