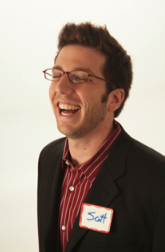 1. What are you doing to become even more visible?

Anonymity is the adversary of success.

I wear a nametag 24-7. In fact, today is my 9-year anniversary. I literally have zero anonymity whatsoever. (Except on Halloween, when I change my nametag as part of my costume.) Other than that, anyone who sees me at any given moment can say to herself, “Well, I guess his name is Scott…”

Now, I’m not suggesting you do the same. In fact, I strongly suggest you DO NOT wear a nametag 24-7. What I AM suggesting is that you consider the adverse relationship between anonymity and profitability. And maybe a good start would be to throw away your marketing plan and begin writing a visibility plan. Because it’s NOT who you know. It’s NOT who knows you. It’s whose life is significantly because they know you.

2. How can you turn your unique personality into a marketing weapon?

Branding is the inevitability of identity.

That’s branding. And it was born about five thousand years before those sleazy advertising jerks starting brainwashing you. Read The Gita and The Tao De Ching. If that’s not branding I don’t know what is.

3. Is your business a friend of simplicity?

Eloquence is the byproduct of simple.

Complexity generates contemplation, and contemplation kills sales. On the other hand, simplicity induces relaxation, and relaxed customers buy. It’s your choice. Sure, it takes more time, energy and courage to create and deliver something simple.

But isn’t it all worth it when your idea is SO simple that a kindergartner runs home from school to tell their parents about it? Stop creating riddles that take too long for impatient customers to solve.

4. Are you drowning in a sea of sameness?

Failure is the destiny of boring.

Nobody buys boring. Not any more. There are too many choices and too little time. So, there’s a direction correlation between how successful you are and how boring you are. Your challenge is to become the most interesting person you know. Which isn’t just some vague platitude – you can literally increase your level of interestingness.

Try this: Amuse people or lose people. Choreograph attention. Build curiosity and expectation into everything you do. Position yourself so, moment-to-moment; people want to see what happens next. And finally, be abnormal, yet relevant to humanity. Remember: If you want to maximize noticeability and spreadability, you need to create a widening circle of interest around it.

Hype is the camouflage of quality.

I used to work in the promotions department for a radio station in St. Louis. And I’ll never forget what my boss told me on the first day of work. “When we record a spot for a new movie release, here’s the rule: The more promotional stuff the production company sends us, the crappier the movie probably is.”

He was right. Box office bombs like K-PAX, Corky Romano and Freddy Got Fingered sent our station truckloads of key chains, t-shirts, posters and other worththless hype. They were compensation for quality. On the other hand, cinematic classics like Memento, Donnie Darko and The Royal Tannenbaums didn’t send a thing. Not even a press release. The quality of those movies spoke for itself.

6. What is your plan for reaching the world with your unique message?

Platform is the artifact of attraction.

While a resume is what you’ve already accomplished, a platform is what you’re currently accomplishing. Think that makes it more relevant than some piece of paper? You bet. Interestingly, the geological definition of the term platform is: “The ancient, stable, interior layer of a continental craton composed of igneous or metamorphic rocks.”

OK. Let’s unpack that scientific idea as it pertains to your Thought Leadership world:

(1) Ancient, meaning long-term viability, of your expertise, that is.

(2) Stable, meaning a solid foundation of value, which refers to your body of work.

(3) Interior, meaning deriving from your core, aka, speaking your truth in whatever you publish.

(6) Metamorphic, meaning specific shape or form to your thoughts, which means you’ve taken a side, picked a lane and put a stake in the ground.

Sticky is the start of spreadable.

But that doesn’t mean it’s enough. Sticky doesn’t mean viable and shtick doesn’t mean substance. Sticky literally means “adhesive,” whereas spreadable means, “to stretch out and send in various directions.” Your mission is to prove to people that you’re worth hanging in there for. That their long-term investment in you will pay dividends eventually.

As George Carlin reminded us, “You want people to know the accumulated record, not just a spotty shot.” Otherwise you’ll be dismissed as inherently remarkable, yet ultimately inconsequential.

LET ME ASK YA THIS…
Does your brand pass The Ginsberg Test?

LET ME SUGGEST THIS…
For the list called, “11 Ways to Out Market the Competition,” send an email to me, and you win the list for free!