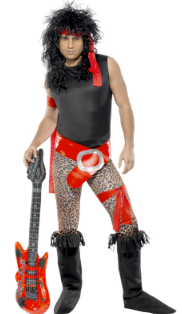 There are no cover bands in the Rock and Roll Hall of Fame.

The same goes for business: The more imitatable you are, the less valuable you are.

That’s why imitators never make history – only originators do.

Your challenge is to honestly ask yourself if the personal brand you’re building is (truly) an amplification of your uniqueness … or just an echo of somebody else’s marketing.

Because if you don’t display your own creative originality, your brand will become (yet another) interchangeable mediocrity, fading into the multitude of sameness.

Fortunately, it doesn’t take a lot of money to build a rockstar brand…

Don’t be fooled by headlines like, “Coca-Cola spends ten million dollars on a thirty-second Superbowl spot!” or “Macy’s takes out front page ad for $50,000!”

AS LONG AS YOU REMEMBER: Your personal brand is the price of admission. It’s no longer a novelty – it’s a necessity.

And I’m not talking about all that superficial, low-level advice you read from so-called “branding experts” about how to “dress for success.”

Branding is identity.
Branding is what you’re known for knowing.
Branding is the best, highest version of yourself – and how other people experience themselves in relation TO that self.

And without it, you lose.

“Be branded or be stranded,” I like to remind my clients.

Are you willing to stick yourself out there and make your own music?

Good. Because most marketing just makes noise. For example:

Think of the most horrible sound imaginable.

Maybe it’s fingers on a chalkboard.
Maybe it’s a baby screaming in pain.
Maybe it’s someone choking on a piece of broccoli.
Maybe it’s turning over the ignition on your car when it’s already started.

That’s the effect noise has on people.

Now, let’s try something else.

Think of the most beautiful music imaginable.

Ahhhhhhhh. Puts your soul at ease, doesn’t it?

That’s the effect music has on people.

So, music versus noise. Which one does YOUR marketing make?

That’s precisely the problem. The majority of the marketing out there isn’t music – it noise. And customers are tired of it. Their ears are bleeding, they’re not your little targets anymore, and THEY are the ones who choose how much attention to give to you.

The question is two-fold: (1) Is your marketing making music or noise? And (2), If you ARE making music, is it YOUR music, or are you just playing a cover tune of somebody else’s?

YES, you can always play someone else’s material, but it won’t sustain you. It won’t challenge you. It won’t expand you. And it certainly won’t guarantee you success.

But you know what? Receiving a nice round of inner applause feels a hell of a lot better.

If you truly want to build a rockstar brand without breaking the bank, you better make music and not noise; and you better be sure that music is your own.

LESSON LEARNED: Don’t march to the beat of a different drummer become the drummer yourself.

LET ME ASK YA THIS…
If your personal brand was a cereal, what would it be?

LET ME SUGGEST THIS…
For the list called, “26 Ways to OUT Brand the Competition,” send an email to me, and you win the list for free!

Who’s telling their friends about YOU?

Tune in to The Marketing Channel on NametagTV.com!