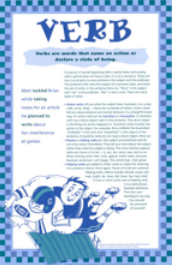 A verb is anything that expresses action or being.

It could be a word, then again, it could also be an idea.

Or a person.
Or a product.
Or an entire organization.

THE POINT IS: Nouns aren’t noticed.

What about you? Are you a verb?

Today we’re going to explore a list of eleven strategies to transform yourself, your ideas and your organization into a big, sexy, voluptuous verb.

1. Nouns are the enemy. A few years back on Seth Godin’s award-winning blog, he posted the following:

“People care much more about verbs than nouns. They care about things that move, that are happening, that change. They care about experiences and events and the way things make us feel. Nouns just sit there, inanimate lumps. Verbs are about wants and desires and wishes.”

Lesson learned: Refuse to live in a state of low-grade vitality. Save that for the nouns of the world. Since you’re a verb, your only option is to live a drudgery-free existence. Otherwise your muscles will atrophy, hampering your ability to make meaning in the universe.

Now, should you wake up one day and find yourself in noun territory – that is, stalemated and unmotivated – don’t beat yourself up. First, determine why you stopped taking action. Next, apply profitable and productive pressure to yourself. Then, respond spontaneously to the world around you and deploy the hell out of yourself. What are you translating into action?

2. Realize what the drug of inaction cheating you out of. We all succumb to the seductive sirens of inertia. And while plunging immediately into the vortex action is a romantic and simple notion, it’s harder than it looks. Especially if you’re addicted to the sweet, safe and snuggly nectar of idleness.

My suggestion: Start with one foot on the boat and one foot on the dock. Then, as your legs stretch farther and farther apart, think about what opportunities you might be cheating yourself out of by refusing to evolve.

It’s a difficult truth to confront yourself with. But sometimes the only way to embrace your exquisite verbiness is to create a deficit position. Are you a prisoner of inertia?

3. Turn your body into a verb. The richest benefits to practicing yoga are the startling similarities between the studio and the world. I’ve only been a student for three years, but I’ve already found that as my mental and physical flexibility increases, as my emotional stamina deepens, and as my bodily movements become more graceful, so it is with my life. Pretty amazing.

And you don’t read about that kind of stuff on the brochure – you just have to try it for yourself. It reminds me of what my friend Chad, a movement educator, once told me over a bowl of gumbo: “An improvement in movement is an improvement in everything.” Are you ready to step forward into the future and beyond the limits of yourself?

4. Most people will wait until they see you in action to believe you. Fine. Let them wait. The longer they wait, the stronger you’ll be when they finally catch a glimpse. And the best part is, when your visible velocity alters people’s pulses, they’ll wonder why they didn’t believe in you in the first place. Suckers.

That’s one of the leading attributes of people and organizations who are verbs: They strike a balance between patient and impatient. They’re willing to take action immediately; but stick around long enough until the laggards come to their senses. If your life depended on taking action, what would you do differently?

5. Backward progress still counts. Sure, it’s a step back, but at least you’re still stepping. Movement – whether backwards, forwards, lateral or diagonal – is necessary. Some people just stand. Those people are called nouns, and they are condemned to irrelevancy.

Verbs radiate in all directions.
Verbs plant the seeds of movement.
Verbs participate with the action of life.

Be one. Be a man of constant action. Let your inner exuberance erupt through your skin. Shine all of your heart into the world and watch it glow like a gas lamp. Are you worrying about the direction of movement when you should be worshiping the derivative of it?

6. Foot service, not lip service. Winners win through swift action, not swell argument. And although I hesitate to draw another simplistic, narrow-minded chalk line that divides the entire human race into two convenient categories, what the hell. Here goes nothing. There are two kinds of people in the world: People who talk shit, and people who do shit.

In short: Nouns and verbs. Decide which one you are. Remember: True success is a function of action taking, not promise making. Are you investing your time in shuffling your feet or flapping your gums?

7. Strike a passionate pose. At the risk of sounding like (yet another) self-help, motivational fluff artist, a verb without passion is nothing but a noun in drag. However, here are a few thoughts about passion that you’ve probably never considered.

First, passion without purpose is pointless. Otherwise your passion becomes nothing but beautiful blazing fire that burns you and everyone you touch. Secondly, ask yourself the following questions to gauge the relevancy of our passion:

Keep these thoughts in your mind and you’ll prevent striking a passionate pose that nobody notices. Are you currently operating out of your passion in the most profitable, healthy way?

8. Resist the pressure to take action inconsistent with core values. Earlier you learned about the “seductive sirens of inertia,” and how idleness is the enemy to being a verb. Which is true.

Just remember: Movement for the sake of movement doesn’t matter if it upsets your non-negotiables. Otherwise you become a verb people delete from their vocabulary. After all, nobody wants to hang with someone whose value system changes quicker than a NASCAR pit crew. Are you negotiating the fine line between stillness and exertion?

9. Surrender to the next phase of your own evolution. Earlier this year when I turned thirty, I made the decision (not) to mope around like most people do when their thirtieth birthday comes around. Instead, I memorialized the shift into the next chapter of my life.

I didn’t celebrate my thirtieth birthday – I viewed it as an upgrade to “SDG – 3.0.” I even ordered a hundred orange silicon bracelets to commemorate this life change, which I plan to wear daily until my next birthday.

It’s been a fun experiment. More importantly, I’ve learned a few cool lessons about being a verb: Stay in stride with the upward, progressive movement of your life. Then, with buoyant spirit, with firm foundation and with immediate intent, reorient yourself in new directions. People will notice. Will you use your situation as a catalyst to grow and evolve, or will you use it to beat yourself up?

10. Find the pivot. In physics, a pivot is the object on which something turns. Which means the pivot has paramount significance on any given situation. Especially when it’s time to change direction.

So, as a verb, your challenge is twofold: First, locate the pivot as quickly as possible. And second, move along crisply. Strike out into uncharted territory, springboard into the unknown and navigate like a pro.

Don’t worry: Life has a way of giving you just enough to move forward. Have faith in that, and every step will be a funky adventure. How are you increasing circumference of your life?

11. Be more vehicular. The earliest translation of the word “vehicle” derives from the 1612 French term vehicule, which means, “a medium through which a drug or medicine is administered.”

Cool. Can you imagine how much change you could create in the world, how much meaning you could make in the universe, if you viewed yourself in that way?

It all goes back to the questions, “What were you designed to cure?” and “What are you the answer to?” Practice answering those questions with your actions, every single day, and you’ll be more of a verb than Merriam Webster. What drug do you administer?

For our final thought on verbs, let’s turn to Buckminster Fuller’s 1970 book, I Seem To Be A Verb:

“I live on Earth at present, and I don’t know what I am. I know that I am not a category. I am not a thing — a noun. I seem to be a verb, an evolutionary process — an integral function of the universe.”

REMEMBER: The only way to win is to make better decisions that everyone else.

So, make the decision to express action and being.

LET ME ASK YA THIS…
Are you an expression of action?

LET ME SUGGEST THIS…
For the list called, “11 Ways to Out POSITION Your Competitors,” send an email to me, and I’ll send you the list for free!