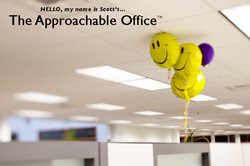 Depending on the situation, you might try any of the following Phrases that Payses to diffuse their negative energy:

1. “You may be correct.” This phrase diffuses the energy behind someone’s attack and avoids threatening the attacker. And by giving an impression of active agreement – not passive acquiescence – you avoid adding fuel to the fire. What’s more, “You may be right” validates a particular part of someone’s argument. Which doesn’t mean you TOTALLY agree with her. But, it does make it easier for the other person to hear your side of the story by way of reciprocation.

2. “I agree with you.” Similarly, this phrase “agrees with thy adversary quickly,” as the scripture suggests. It builds common ground on a point of mutual agreement and aligns you with the other person. That way, you’re both on the same side. Which is how resistance dissipates. Which makes moving toward a solution flow a LOT smoother.

3. “What makes this so important to you?” This gem is especially effective when someone shoots down EVERY idea you suggest. It identifies a person’s motives and challenges them to honesty examine their emotions, which, if they’ve lashed out at you, probably isn’t something they’ve done yet.

4. “I respect your opinion of my work.” My all-time favorite. Perfect for artists and creative professionals. Remember: If everybody loves your brand, you’re doing something wrong. And if you’re not polarizing or pissing of at least SOME people, you’re doing something wrong. Likewise, if everybody loves your idea, it’s probably not that good of an idea. So, next time someone expresses a dislike for your work – especially in an attempt to fluster, insult or embarrass you – try saying this phrase.

5. “How exactly do you mean?” This responds directly to the attack instead of letting it pass unchallenged. Another variation is, “Can you give me a specific example?” Either way, have a paper and pen ready to take notes to demonstrate a willingness to listen and openness to feedback.

6. “You’re right.” Two of the most powerful words in the world. Also, two of the most beautiful words anyone will hear. This Safety Phrase surprises the attacker, short circuits their verbal violence loop and communicates the message that you’re not going to play by their rules. What’s more, it forces the other person to make a new move. Additionally, saying, “You’re right,” contains the following attributes:

a. It’s positively framed. Which redirects the conversation into a productive direction. And that can ONLY help achieve greater resolve.
b. It enters into someone else’s reality. Which demonstrates empathy. Which shows you’ve listened. Which advances the conversation into safer, more productive territory.
c. It increases someone’s pride. Which speaks to their self-esteem. Which makes them more confident about themselves. Which makes YOU feel better about YOUR self.
d. It builds common ground on a point of mutual agreement. Which reduces emotional distance and increases trust. And especially if someone’s really upset, getting her to trust you is your key goal.
e. It validates a particular part of someone’s argument. Which doesn’t mean you’re TOTALLY agreeing with them. But, it makes them easier for them to (then) hear your side of the story.

7. Silence. Lastly, sometimes the best way to reverse the momentum of an overly aggressive or hostile person is to say nothing at all. To just shut up and let them vent. See, in many cases, that’s all they wanted: Someone to listen to them. To honor them. Or, in some cases, that’s all they needed: Someone to serve as a sounding board so they could hear how absurd their words actually were.

Of course, if none of these practices work, you can always grab the fire extinguisher, either for beatings or sprayings. It all depends on how tall the criticizer is.

LET ME ASK YA THIS…
How do you approach the office criticizer?