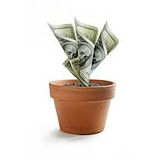 When you create, you sit there with your hands folded in your lap, waiting for instruction and inspiration. Every single day. A quiet, alert witness, attending to the stream of creative thought that floods your veins. Are you growing creative ears?

2. Chase. Pursue words and ideas that haunt you and that you don’t understand. Amplify your deepest curiosities. Then, when you FINALLY catch up with them, you will “get” what they’re supposed to mean. But only if you keep running. What ideas are you chasing?

3. Chronological Creativity. Once you pluck the idea, you plant it like a seed. Then, by filing it away into your brain and (hopefully) on paper, it’s available for harvesting when the time is right.

Then, you come back to it periodically, adding a word or two, subtracting a phrase or three, here and there. Spicing it up. Giving it some sunlight. Watering it with the creative nutrients it needs to eventually blossom. Commencing artistic photosynthesis. Are you a creative farmer?

4. Concentrate white capturing. After observation, you follow the same process with capturing. You write ONE thing. Some line. Or sentence. Or phrase. Or truth. And then you just STARE. Until you see something. Until some image, some related idea comes forth.

Like one of those Magic Eye posters that starts out looking like a bunch of triangles, but eventually looks like a schooner. Are you willing to stare into a vortex of nothingness for fifteen minutes until a speck of creative gold dust finally surfaces?

5. Creativity is cooking. Simmering. Mixing. You mold knead, rework and edit, walking away periodically to your ideas simmer. And each time you do so, you return with a fresh perspective. You also notice that your ideas have expanded. Like a pizza crust in which the yeast has risen, your thoughts have organically grown independently of you.

So, now it’s time to come back and attend to them. Remember: Writing is a coalescence of related fragments. Concocting a potion. Crafting a mosaic of words, phrases and sentences. What are you cooking up?

6. Emotional Transference. You’re writing, and before you know it, as one emotion comes out, ALL your emotions come out. Related or not. Anger hitches a ride with jealousy. Sadness mooches on the coattails of fear. Annoyance hangs on to the bumper of apathy. One bleeds into another.

And I say: The more the better. Just let ‘em out or else they’ll find a home somewhere in your body. Ouch. What unexpected emotion does your writing release?

7. Enter the flow and disappear. You’re so deep, so engrossed, that you lose track of time. You forget things, like lunch. Or that you had a meeting with your friend Karen. Or that you spilled your mug of chamomile tea all over your leg like three hours ago. Or that you have a sprained ankle. (Which ankle was it again?)

It’s just like when you’ve been jamming along to a Black Keys song for sixteen minutes and eventually look down at your strings only to realize they’re caked with blood. As Marvin Bell says, “You’re in flow when you don’t know you’re in pain.” So, enhance the trance. The goal is to forget yourself, yet be aware OF yourself. Psychologically stopping the movement of time. When was the last time you got lost?

8. Just react. Follow your curiosity. Scratch what itches. Respond to your passion by writing in the direction of what shakes you. Allow your essence to lead you and then render the contours of your inner landscape. What are you reacting to?

Either way, when you make your second and third and fourth impressions, the idea grows. It gets richer and more legitimate. But only if you’re patient. How often are you returning TO and enhancing the complexity OF your ideas?

10. Open a vein. Sit down at the page, grab a razor, and cut that beeyoch open. Then, let it bleed onto the page until there is nothing left. Empty yourself of yourself. Let go of your writing. Let it unfold. Release the music that is within you. Crack your inner world open and closely monitor that which oozes out.

Do so until every thought, every emotion and every idea has been liberated. Until you’re woozy and tired. Until you’re anemic and diabetic. Make your readers suspect that Dracula stopped by your office to chomp a hunk out of your neck. That’s how much blood we’re talking about. Do you write with your pen dipped in your own blood?

11. Stillness works. When you hold yourself in a state of alertness, the world quiets down. Your breathing stabilizes. You blood pressure decreases. Then, within that calmness, beauty and truth begin to appear. And eventually, you don’t just start to HEAR things; you start to FEEL things.

These valuable nudges from your unconscious that tug at your coat tails. Pssst! Over here! They say. And as you turn your head, you being to channel that overflowing energy into the rivulets that feed into your personal creative ocean. In breath: Experiences. Out breath: Art. How’s YOUR breathing?

12. Unconscious integration. Defined by yours truly as, “When the natural geometry of your writing self-organizes and distributes without cognitive effort.” You let your mind unconsciously churn away. Laying out all these scraps, these ideas and these modules, as pieces to a jigsaw puzzle, but NOT knowing what the final picture looks like on the front of the box.

Eventually, if your mind has been properly trained and you TRUST it, every once in a while, something will click. Some amazing idea will just spring into your mind. It will only seem to be instantaneous, when in reality it’s taken days, weeks, months, maybe even YEARS of unconscious integration to come together. What puzzle are you not aware you’re putting together?

13. Write THROUGH things. Just like in yoga when you breathe THROUGH a difficult posture, in life you WRITE through a difficult situation. You catalyze your discontent. You slug it out.

You “get behind the mule in the morning and plow,” as Tom Waits sings on his killer record, Mule Variations. You trudge through even your darkest days using your pen as your pickaxe, knowing that eventually, you’ll come out on the other side. Big time. Andy Dufresne style. What gifts and hidden assets lie hidden in your seeming impediments?

LET ME ASK YA THIS…
How are you transforming write into wealth?

LET ME SUGGEST THIS…
For the list called, “26 Ways to Out BRAND Your Competitors,” send an email to me, and I’ll send you the list for free!

Nobody seeing YOUR name anywhere?