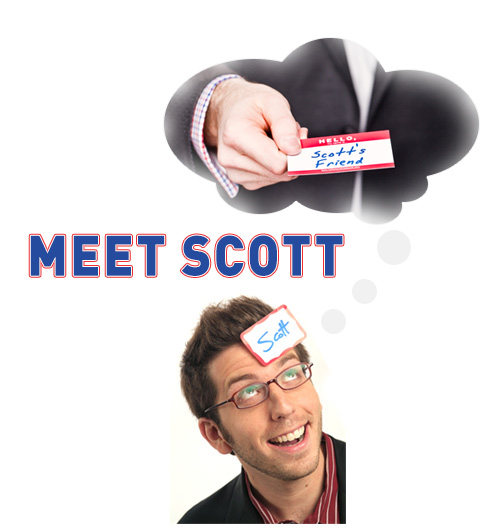 What happens when you wear a nametag twenty-four seven? Even to bed?

Just ask Scott Ginsberg. In the beginning, it was just a gimmick to make friends. But soon, his crazy idea didn’t seem so crazy.

Scott’s social experiment has now evolved into an urban legend, world record, cultural phenomenon, and a profitable enterprise. Simply google the word nametag, and you’ll see his work benchmarked as a case study on human interaction, revolutionizing the way people look at approachability, identity and commitment.

Since 1999, Scott has authored 30 books, published an award winning blog, created NametagTV.com, released seven albums on his own record label, done 500+ interviews with every news outlet in the country, created a suite of creativity based software apps, given a TEDx talk and delivered hundreds of presentations and corporate training programs worldwide.

And he was also inducted into Ripley’s Believe It Or Not as the world record holder of wearing nametags.

He lives in Brooklyn, where he often talks to strangers.