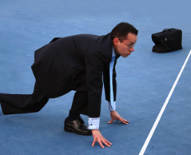 1. Abandonment is the backbone of entrepreneurship. By definition, an entrepreneur is someone who undertakes and manages risk. Someone vulnerable. Someone courageous enough to stick herself out there.

And so, what she abandons are outmoded traditions. Popular delusions. Stale thinking. What she abandons is any shell that would otherwise choke the budding dream inside of her. Are YOU willing to plunge forward planless into the vortex of action?

2. Dissatisfaction is the ember of initiative. Only pissed off people change the world. Not because they’re negative – but because they notice a blazing fire deep in the recesses of their hearts that will not extinguish until SOMETHING changes. And that doesn’t mean they exhaust their entire energy supply sitting at home yelling at the television. Just because you’re pissed off doesn’t mean you’re productive.

But, take George Carlin – now THERE’S a guy who was pissed off. The difference is, Carlin’s dissatisfaction with the world was the motivation he needed to write twenty pages a day for fifty years. Most people don’t know that about Carlin – he was a creative machine.

That’s how he ended upon The Tonight Show over a hundred and thirty times. That’s how he released twenty-three comedy albums, three best-selling books and fourteen HBO specials. Because he was pissed off. That was the ember of his initiative. And it changed our world forever. What injustice did you set out to fight when you first started your business

3. Execution is the architect of eminence. You know my mantra: “Ideas are free – only execution is priceless.” Consider these suggestions for doing so:

Think on paper immediately. Be impatient. Hack the rules. Don’t be stopped by not knowing how. And, fail like you mean it. Remember: Execution is eloquence. And there are two kinds of people in the world: Those who use their mouths and those who use their feet. Are you a talker or a doer?

4. Imitation is the vestibule of failure. There are no cover bands in the Rock and Roll Hall of Fame. The same goes for business: The more imitatable you are, the less valuable you are. That’s why imitators never make history – only originators do.

Your challenge is to honestly ask yourself if the personal brand you’re building is (truly) an amplification of your uniqueness … or just an echo of somebody else’s marketing. If you don’t display your own creative originality, your brand will become (yet another) interchangeable mediocrity, fading into the multitude of sameness. A needle in a stack of needles. Are you The Echo or The Origin?

5. Impatience is the greenlight of greatness. Just go. Enough limitation-driven self-talk. Enough lame excuses for why you’re not ready. When it comes to entrepreneurship, I’ve got news for you: You’re never ready. And you never will be. So, learn to relax into that realization first.

Next, give yourself permission to plunge into the abyss of ambiguity. Then, during freefall, trust that you contain a multitude of inner resources that will richly support you. What level of greatness are you unable to reach because you’re too patient?

6. Later is the whopper of procrastination. Later never comes. Ever. Your ego just convinces you that it does. That way you don’t have to take any personal responsibility, nor feel guilty for procrastinating.

My suggestion is simple: Write the word “later” on a sticky note. Then draw a big X through it. Look at it every day. That should help eliminate that word from your vocabulary. How much money is procrastination costing you?

Try this: Make a list of ten actions you can take THIS WEEK toward your ideal future. Next, email that list to three people you trust who will keep you accountable. Tell them to call you on Sunday night. Then, if you haven’t achieved at least five items on your list, agree that you’ll buy each of them lunch. “Maybe” that will make a difference ☺. What are you insufficiently committed to?

8. Duality is the heartbeat of mastery. In Bikram Yoga, students experience the simultaneous practice of complete relaxation and absolute exertion. It sounds counterintuitive, but you CAN execute both at the same time. As long as you know how to listen to your body.

For example, standing bow posture practices an intense stretch of both arms in opposite directions. But it also requires that you relax into your low back while doing so. That’s duality. Without it, the posture is wrong. And the cool part is: Your business (and your life) manifests this same practice of duality in a number of ways.

Another example: Entrepreneurship requires bottomless amounts of patience: With yourself, with others, with your idea and with the world. The patience to take the longcut and work your face off. At the same time, entrepreneurship also requires massive levels of impatience: Restless expectation. Not accepting delay or opposition. Raring to go. A constant desire for change and excitement. The impatience to “just go,” even when you have no idea what the hell you’re doing.

Ultimately, your challenge is to pinpoint, honor and leverage whatever duality exists in your universe. Like your own personal yin-yang. And to simultaneously attend to the opposite parts of the larger whole, knowing that both are required to achieve mastery. What dualities do you need to honor in your life and business?

LET ME ASK YA THIS…
What will it take to get your business off the ground?

LET ME SUGGEST THIS…
For the list called, “12 Ways to Out Service the Competition,” send an email to me, and you win the list for free!